The largest British-owned supplier of cider in the UK market is having a fully automated warehouse facility built using structural sections supplied by British Steel.

Thatchers Cider is a fourth-generation independent family-owned business, which was founded by William Thatcher in 1904.

The company now employs around 200 people and has 500 acres of its own orchard, as well as using apples from other growers in the area.

In 1992, Martin Thatcher took over the role as managing director for the business. Its growth under his direction and vision has been a big success story for the UK drinks industry.

Part of that growth has been the investment in capital, equipment and buildings to develop a sustainable business for the future, the people who work at Thatchers Cider and the community it operates in.

In the last 10 years, Thatchers Cider has constructed 4 major building projects, all using steel from our Teesside site.

The Jubilee Building was constructed in 2012/13 to house its kegging, canning and bottling facilities. It was opened in 2014 by the Earl and Countess of Wessex.

The Hive (Phase 1) was constructed in 2018/19 and was the first part of the dark warehouse that contained a suite of open plan offices that brought the Thatchers Cider on-site team together in one place.

Myrtle Mill was also constructed in 2018/19 and is currently in use as a secondary warehouse.

The Hive (Phase 2) began construction in 2021 and when complete, will house 18,000 pallets in the dark warehouse. It will be in keeping with the internal office décor, which features a honeycomb design. 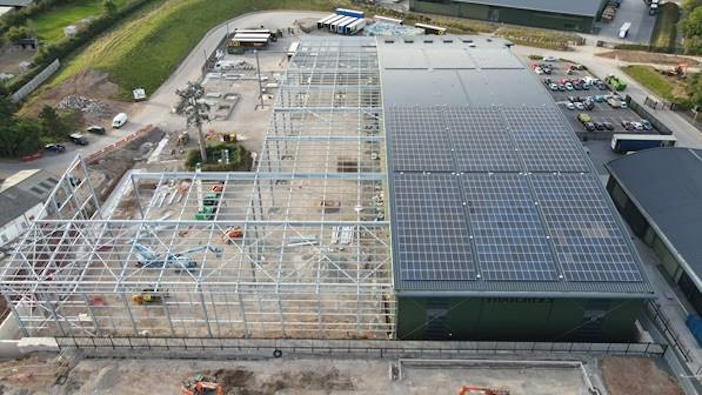 The project is intended to increase the efficiency with which stock is moved through the production process and speed up the loading and unloading of lorries on site.

Morgans of Usk fabricated the steel for this £30m investment project, which was supplied by British Steel.

We are investing in our site at Myrtle Farm for the continued quality improvement of our products and our customer service.

We are delighted to be supporting local contractors and British businesses (particularly British Steel) who are assisting us in building a better future.