There are locations in many networks where rail life is determined by corrosion and the cost of managing their life and maintaining their safety can be extremely large.

Rail corrosion is usually seen in one of two forms:

This may be a loss of section all around the rail as shown in the image below, or loss in section in a particular area, e.g. around fastenings or under rail pads. 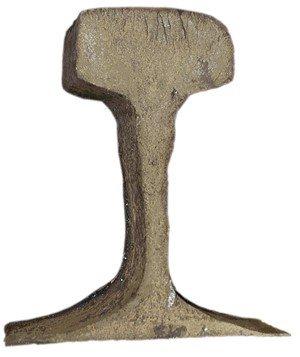 Foot fatigue failure now accounts for over 50% of broken rails in some rail networks. In service as a train passes it puts stresses into the bottom of the rail that supports it. If something raises the stress in the foot area, in this case a corrosion pit, then this can initiate a fatigue crack to grow.

In the image below you can see a small fatigue crack which has grown from a small corrosion pit – the fatigue crack being the lighter semi-circular area at the bottom of the rail foot. Ultimately this fatigue crack has caused the rail to break in service causing disruption and unplanned maintenance, as well as creating a safety issue. This type of failure is extremely difficult to manage as there is often no prior indication of an issue as you cannot see the corrosion pits or the fatigue cracks using conventional inspection techniques. 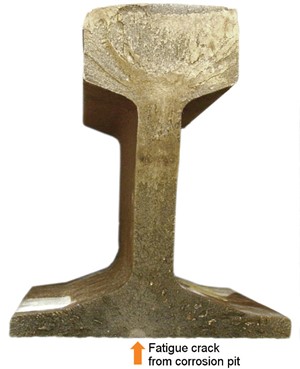 Rails are present in a wide range of environments and some of these can accelerate the corrosion of unprotected rails to unacceptable levels. Whilst some rails may last for 60 years, others in the most aggressive of locations may last only months.

Below are pictured some examples of real-life rusty rails - note how much useful life there would be in the rail head if the foot had not suffered such excess corrosion. The first two rails were removed before failure occurred. Sadly the third rail broke in service causing delays and unplanned maintenance.

As can be seen above, although the rail foot condition in the above photos look similar, the age of the rail is significantly different in each case due to the location's environment. As site conditions vary significantly, it is impossible to guarantee an absolute corrosion life for Zinoco rails without accurate knowledge of the site conditions. However, a corrosion life extension of 3-10 times is typical using Zinoco rail (compared to an unprotected rail).

The cost of premature rail replacement due to corrosion is high. Both in terms of the renewal financial cost (which typically outweighs the actual cost of the rail by a large amount), and also in terms of disruption to the rail services (and road services if it is a road crossing). Often rail corrosion occurs in some of the most challenging locations for rail inspection and replacement – tunnels and road crossings. Rails with excess corrosion also have obvious safety implications.

Read about how Zinoco works in 3 ways to protect rail and extend its life here.