Traditional historic rail coatings provide a barrier to corrosion by preventing air, water and salts from coming into contact with the steel rail. If you prevent these things reaching the rail, you prevent corrosion. Typically traditional coatings such as epoxy paints, rubbers or other such as insulating coatings are used to encapsulate the rail.

Zinoco provides a barrier to corrosion by preventing the corrosive agents contacting the steel by coating vulnerable areas with a metal alloy. This metallic coating is far more durable than traditional rail coatings.

Zinoco was designed to be far more resistant to damage via impact and abrasion than traditional rail coatings.

Zinoco is 6 times more impact-resistant than our previous rail coating, and 5 times more resistant to abrasion.

Barrier-only protection has its limitations. Any damage to the surface allows the corrosive attack of the rail to start. Typically rail environments are harsh places to operate where some damage is often inevitable, whether that be from installation, in-use damage such as flying ballast or maintenance operations such as tamping or clip replacement.

In the same way that an untreated chip in the paintwork would turn into a hole in a car from the 1970s within a few years or even months, any damage to traditional barrier-only rail coatings leaves the rail open to corrosive attack. It only takes one spot of damage to turn into a corrosion pit which can then initiate a fatigue crack which can cause the rail to fail. 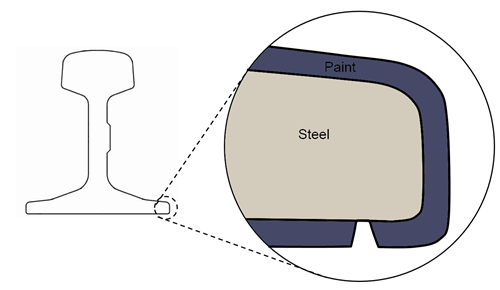 A pin-hole gap in the coating, a scratch or chip during installation, subsequent use, or even from maintenance all can expose the steel beneath making it vulnerable to corrosion.

As corrosion progresses the corrosion products produced force more coating away from the surface and a larger area is exposed to corrosion.

The deeper the corrosion pit formed, the more likely fatigue failure is likely to occur, and in the UK over 50% of rail failures originate from the rail foot, often initiated from corrosion.

Barrier-only coatings work effectively only when there is absolutely no damage to the coating. In a real-life rail environment this is nearly impossible to guarantee. Where the protection offered by barrier coatings end, Zinoco has two more lines of defence which are discussed below.

Zinoco provides an excellent barrier to corrosion with greatly enhanced impact resistance compared to previous coatings, but it also has a key second method of defence by providing sacrificial protection, even if areas of the coating have been breached. This is how it works:

Cathodic protection uses some clever chemistry to protect the rail from corrosion damage. The same technology is used to protect ships hulls, pipelines, cars and even railway structures such as lineside masts, poles and bridges from corroding.

Zinoco contains zinc which is commonly used to galvanise steel to protect it from corrosion. Zinc offers cathodic protection to the steel it is attached to. This is the reason that a stone chip on a modern car doesn’t turn into a hole through the steel in months, as the steel beneath is protected by a layer of zinc.

Cathodic protection using zinc is also often known as sacrificial protection. In simple terms the zinc sacrifices itself by corroding (slowly) in preference to the steel.

A brief simplified explanation is given below: 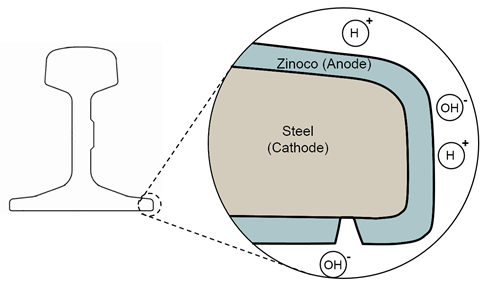 When Zinoco rails are in contact in an electrolyte e.g. salt water, differences in electrical potential develop between the Zinoco and the steel core of the rail and an electrolytic cell is formed. The Zinoco outer coating is more electrochemically active than steel beneath.

As a result of the differences in electrical potential, negatively charged electrons flow from the Zinoco (anode) to the steel rail (cathode) and Zinoco in the anode area is converted to positively charged ions.

At any areas of coating damage (and damage is very difficult as you'll see in a later section), the steel cathode surface becomes negatively charged with electrons reacting with positively charged hydrogen ions from the electrolyte, liberating hydrogen gas. There is no chemical reaction between the steel cathode and the electrolyte and therefore the steel is protected from corrosion. In simple terms - the coating sacrifices itself over time to protect the steel beneath. In short:

Zinoco because of its composition is electrically conductive. This is key to providing enhanced tolerance to stray-current corrosion, and also makes it easier to use.

The electrical current flow drives corrosion of the rail at an accelerated rate and steel is lost from the surface, (shown in red above).

Some companies offer insulating barrier type coatings as a solution to this issue. This is not a good solution. 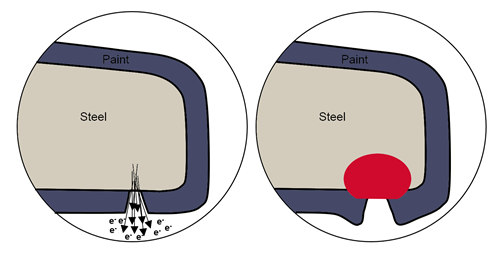 In a perfect world the coating insulates the rail completely and no stray current flows. However, any imperfection or damage to the coating along the entire length of rail throughout its entire life concentrates all the stray current into one small area. This concentration of corrosion damage into one small area can create extremely high corrosion rates with a rapid loss of integrity at this location. The deeper the corrosion, the greater the chance of it initiating a crack that will cause the rail to fail.

It is for this reason that insulating coatings are prohibited from use in 3rd and 4th electrified rail areas in some rail networks.

Zinoco is a conductive metallic coating and so does not suffer the same issues with stray current concentration.

The super-hydrophobic finishing treatment prevents water ingress/penetration into the coating. It repels any contaminants, so prevents prolonged contact between the rail and any corrosive material and also creates a self-cleaning effect.