Developing the next generation of rail corrosion protection

After the successful development of our previous Railcote product, we understood its limitation in terms of impact and abrasion resistance. So our Research and Development teams got to work developing a superior product. One which retained the damage tolerance, but importantly one which was far more resistant to damage in the key areas of impact and abrasion resistance.

Many options were considered and tested in the laboratory, and some of the comparison test information is presented below.

The prohesion test is an industry standard tests which tests the performance of coatings. Here it is used to both test the performance of the coating, but also the damage tolerance by artificially damaging the coating in an area of the test panel. The test samples below have undergone 2,000 hours of testing.

Most coatings offer good levels of corrosion protection where the coating is perfectly intact. However in real-life performance some degree of damage is virtually inevitable over the decades of life often expected from rails. The damage may be from flying ballast, imperfect maintenance operations such as tamping or clip installation, or even from installation itself.

The test panels show an uncoated steel panel as a control – which shows severe corrosion and lots of ‘red rust’.

The aluminium coating does not fare well in the accelerated corrosion testing. Red rust is clearly visible in both the coated and also the artificially damaged areas.

Both the Railcote and the Zinoco panels show very good protection in the intact coating areas, but also show no red rust in the artificially damaged areas. This means that even in areas with minor coating damage the steel beneath is still protected ensuring its life is maximised.

A bespoke test was developed to mimic real life rail coating damage in association with Network Rail (the UK rail infrastructure owner). This test was then used to assess the performance of various coatings and potential solutions.

The results show the energy required to breech the coating to reveal bare steel beneath, (bare steel is shown with copper colour in images below). The higher the energy needed the more resistant to damage the coating is.

In service, particularly around fastenings and within level crossings a rail coating experiences abrasion. Taber wheel abrasion testing was used to evaluate the performance of several coatings. The lower the amount of material that is lost from the surface, the more resistant the coating is to abrasion. Zinoco clearly gives a huge improvement in abrasion performance over previous rail coatings such as Railcote and other historic coatings such as Aluminium. 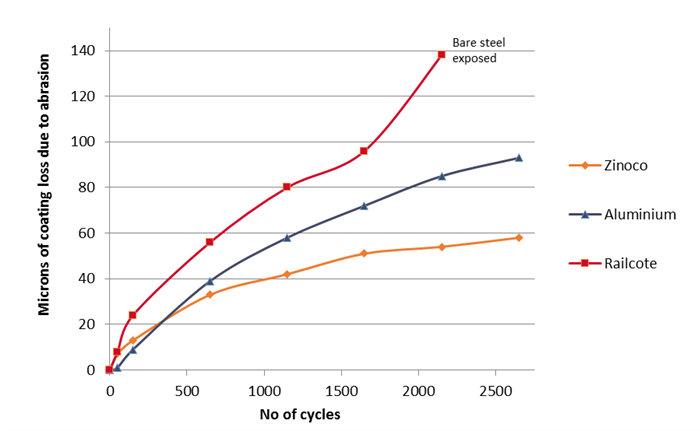 To find out more get in touch and see how we can extend rail life in challenging environments contact us here.