Our Rail Technologies and Research & Development teams have joined forces to carry out track monitoring activities on the emerald isle after Translink observed some unusual activity on its line.

The Rail Technologies team first received the enquiry after hosting a Technology Tuesdays online seminar on ‘Understanding rail defects and solutions’. This explored different types of rail degradation including rolling contact fatigue (RCF) and sparked the interest of Translink Permanent Way Technical Engineer Stephen Lavery, who had identified some exceptional RCF cracking while conducting routine inspection of part of the Translink rail line just outside Belfast.

After initial discussions with Stephen on what he had discovered, Rail Technologies Manager Steve Lewis and Technologist Scott Dyball embarked on a series of visits, first travelling across to Belfast last summer to assess the damage, determine the cause and recommend preventative action.

Steve said: “The cracking was particularly unusual in that it had rapidly developed with only 12 months between an all-clear inspection and the discovery of the advanced cracks. The Translink team was keen to ensure that their inspection regime was sufficiently capturing degradation in a timely fashion.”

COVID-19 had disrupted Steve and Scott’s travel plans for several months, so due to their safety-critical nature, Translink had replaced the cracked rails at 2 of the sites in the intervening time, meaning there wasn’t a lot of material to assess.

On their arrival however, Steve and Scott were able to examine an affected piece of track near Holywood station that had been in service since 2001. They undertook a rail profile survey at various points along the track and compared the dimensions of the in-service track with those of its profile when new. They followed this up with an examination of the train wheel profile at Translink’s vehicle depot in Belfast. 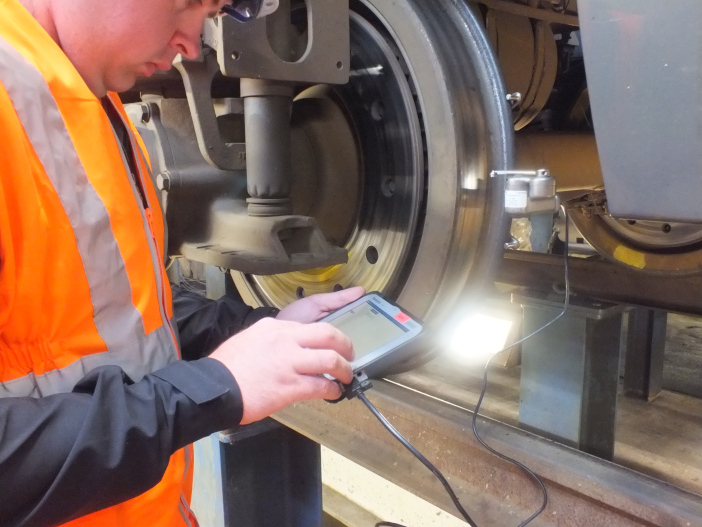 Steve said: “After analysing the data from the first visit, we investigated the mechanism for the development of the RCF’s rapid onset.”

Scott said: “We found that the rail profile had changed over time through natural wear, so train wheels travelling over the rail were contacting in a different position. This shift altered the stress distribution between the wheel and rail, moving from a wear-dominated regime to a RCF one, which promoted the growth of cracks on the rail head.”

Their conclusions were later confirmed by detailed track modelling undertaken by the University of Huddersfield’s Institute of Railway Research (one of Rail Technologies' key R&D partners). This modelling was also used to investigate potential future mitigation measures.

Steve said: “We were lucky that the Holywood site was left in its original condition – otherwise we probably wouldn’t have discovered this mechanism and it would’ve remained a mystery.

“Pleased with the results so far, the Translink team is keen to continue our partnership so both parties can learn from the advanced track monitoring arrangements.”

The team is also keen to explore the recommendations for the mitigation of future issues, including wheel and rail profile maintenance, the use of premium rail, lubrication and vehicle speed/track alignment optimisation.

Stephen said: “Our routine scheduled ultrasonic and visual inspections identified RCF which had passed previous inspections only a year earlier. Crack propagation rates exceeded any we had experienced previously so we engaged with our supplier and subject matter experts in British Steel’s Rail Technologies department and the Institute of Railway Research to conduct a detailed technical investigation. This investigated the causes of the suspected exponential RCF development and how we might better manage it in the longer term so we could embed this within our Rail Health Strategy.

“It has been a very useful and interesting exercise so far working with Steve and Scott. The early findings they have presented in conjunction with the modelling done by the Institute of Railway Research at Huddersfield University have given us at Translink a fantastic insight into the issues we first discovered in late summer 2020. We look forward to seeing the final report and to see what recommendations come out of it to further enhance our Rail Health Strategy.”

Translink Head of Permanent Way Mervyn McCollam echoed Stephen’s comments. He said: “I’m pleased to be able to continue a long partnership with British Steel, with the objective of ensuring the quality and sustainability of the rail assets. The health of the rail is of paramount importance, and the early identification of both failure and repair mechanisms is of great benefit to both Translink and the wider rail industry.”